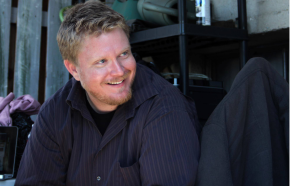 Anthony grew up on the seven hills of Cincinnati, Ohio. As an only child, he kept himself amused by concocting epic adventures for his teams of action figures, a fondness for storytelling that has continued to this day. His interest in the arts really took off at the age of nine when he picked up a trumpet for the first time and discovered the allure of music.

The trumpet served as his primary artistic outlet in marching, jazz, and symphonic bands throughout high school and college. That is, until a fateful night in late 2000 that involved gin and tonics, the movie Swingers, and an Earth-shattering epiphany. Overnight his career and life paths changed, beginning in earnest his pursuit of filmmaking.

Since graduating The Ohio State University in 2003 with degrees in Psychology and Film Studies, Anthony worked in broadcast television and the hotel audio/visual industry until beginning graduate film school at USC in 2007.

While at USC, he produced a number of advanced films, as well as a music video for recording artist Lifehouse through a competition sponsored by Heineken. Anthony wrote and directed his thesis film, Found, which screened at over 20 film festivals around the world and won multiple awards. His career focus is on directing genre films with compelling character-driven stories that delve into matters of the human spirit.

Anthony will direct his first feature in 2020.

A few weeks ago we received some pretty amazing script notes from a major Hollywood player. Not only were we blown away by his generosity, but his in-depth thoughts and critiques really allowed us to look at the film from a different angle and ultimately find a way to expand on an under-utilized thread in the script. Since then, Brian and I have been back to work... adding, cutting, revamping, trimming, reshaping. It's been a

Perhaps A Little Too Crazy…

...And it all fell apart. Just about as quickly as it began. Well, not really fell apart... just postponed. We ultimately weren't able to secure all of the necessary financing, and now that we're less than a month out, we had to make the difficult decision to push back. No new dates set, but hoping for sometime in the spring.   This is far and away the most prep I've ever done on a project

Writing from Cincinnati... here for a personal matter, but figured I'd also get some prep done... location scouting and the like. And why, you ask? Well...   After Brian and I talked about the no-budget feature (entitled 'Red Yesterday') to shoot before the end of the year, we outlined it the next day. Super rough... not even written down. The quickest outline I've ever done. But it was enough. Brian spent the next ten days

Since pushing back from July 6, we were planning on shooting in November. As of today, November is no longer a reality. So now we're tentatively looking at March.   I've heard stories for years about the struggle and TIME it often takes to get an indie film off the ground. I'm seeing firsthand that reality, even while receiving tons of praise on the script. It's been two years now since the project's genesis, yet

The ink was barely dry on draft 8 when I had one of my infamous shower epiphanies (I have a theory as to why so many people get so many great ideas in the shower... ask me some time!) This idea was mostly contained to Act 3, though there ended up being many unexpected (*gasp*) reverberations(!) throughout the rest of the script that we had to address. So after almost four months of sitting on